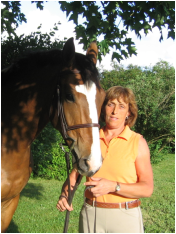 Jill is a highly motivated and successful certified Equestrian Canada NCCP Competition Coach Specialist with over 40 years experience.  Her coaching success is based on experience, training and coaching certification, as well as superior equine knowledge in the ring, in the barn and is reflected in the success of her students. Jill has strong interpersonal skills and a proven ability to work effectively with individuals at all levels. Her passion for grass roots level horse and rider development  is reflected by her enjoyment of teaching all ages and skill levels from novice riders, to students who have successfully competed at equestrian competitions in Ontario, Quebec, Vermont, the RAWF, and the CIEC as well as the Maritimes.

She is proud to have been the NSEF Team Jumper Coach for CIEC Championships and in 2017 for the Atlantic Equestrian Championships.

Jill grew up in Windsor, N.S. and was a member of the Avon Pony Club and credits her first instructor Mary Henry for giving her a solid foundation in horsemanship and for nurturing her passion for horses.  Jill achieved her Pony Club B2 and has served as a National Pony Club Examiner.  Jill has been a certified instructor with CANtra which has been an integral part of the Halifax Junior Bengal Lancers where Jill served as Manager and Chief Instructor from 1984 thru the spring of 2015.

I believe that there is a pyramid on which the equestrian sport is founded. The solid base of the pyramid must be a true love of the horse and understanding of that horse. From this base, horsemanship skills can be learned. You learn to ride the horse and communicate with him and acquire riding skills.

As the riding skills develop and become refined, competition skills may start to develop or in some cases simply the further development of skills and self-satisfaction.

Humans ride for a variety of reasons so the goals can be quite varied.

The base of it all is the love of horses and all that they do for their two legged partners.